New York artist Susan Bee defends the political and subversive potential that develops when art and pleasure unite. Which is why imagination, poetry, humour, subjectivity, textures, colours, lines, and matter play an essential role in her work, both in her collages and paintings and her artist’s books. As an art student in the late sixties, she first came in contact with feminist activism and other social movements such as black power, gay rights, and protests against the Vietnam War. In 1986, she embarked on the project M/E/A/N/I/N/G, a self-managed art magazine that she co-edited with fellow artist Mira Schor for thirty years. In this podcast, Susan also shares the particularities of being a woman and an artist who has passed the age threshold of 65 in New York’s artistic ecosystem today. 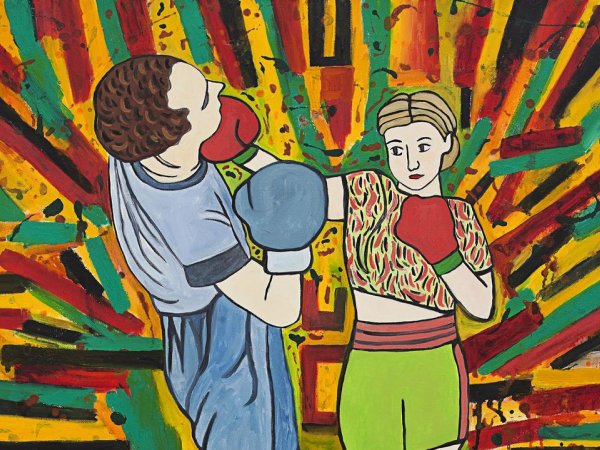 Fefa Vila Nuñez is a queer feminist ‘artivist’, sociologist, mother, essayist, teacher, and many other things. Fefa was one of the founders of the lesbian collective LSD (1993-1998), which was, together with La Radical Gai, one of the touchstones of queer artivism in Spain in the 1990s. Through their political-artistic actions, LSD and La Radi defended new ways of understanding the body, sex, life, death, desire, friendship, family and work relationships, and political action. In this podcast, Fefa Vila reflects aloud on queerness as a state of radical estrangement, which is constantly being redefined. She also talks about the need to experience other forms of sociability, about other affective-relational models and about motherhood.

The work of Isaac Julien moves through liminal spaces. Overlapping zones between photography, film, and installation; choreography and dance; poetry and music… and the infinite possible versions, iterations, and variations that can emerge from systematic work with the archive. Intersections in which fiction, documentary, narrative, and radicality converge to produce aesthetically meticulous and politically powerful imaginaries and stories that challenge white heterosexual film conventions through their temporalities, narrative construction, and aesthetic forms. In this podcast, Isaac Julien talks about the need to give a voice and body to dissident black identity and desire in the cinematic imaginary, about expanded cinema and choreographic montage; and about his constant shifts between the worlds of art, video art, and film.

American composer-producer Lyra Pramuk talks about key moments in her childhood and adolescence, which was marked by a rigorous religious and musical education, and about her subsequent journey to deconstruct her assigned identity, taking refuge in her love of science fiction and role-playing games as basic strategies for reinventing herself. We also chat about performativity, resisting the text, non-verbal music, live vs studio work, the recording logic of the music industry, the importance of queer community building, and clubbing in Berlin.

This project by the researcher and curator Marta Echaves is structured as a web of complementary, interconnected narratives that reconstruct the silenced history of a generation marked by heroin and AIDS in post-dictatorship Spain.

Lithium mines, Trotskyist sects, black boxes, planetary exodus, augmented architecture, a city as big as the entire planet Earth, the mythology of Area 51. McKenzie Wark, Liam Young and Mette Edvardsen explore these and other ideas in an attempt to think about space as more than just a medium. Space as object.

In 1953, after attending the first Swedish Radio and Fylkingen Society electronic music concert with Pierre Henry and Pierre Schaeffer, Swedish artist Öyvind Fahlström wrote a manifesto for concrete poetry. More than a decade later, the Swedish Radio broadcasted his pioneer radio piece “Fåglar I Sverige (Birds in Sweden)”. In the decades that followed, the complexity and broad spectrum of productions coming out of the Elektronmusikstudion (EMS), founded by Karl Birger in 1964, made it a hub for artists. But while the text-sound scene was in and out of the Sound Workshop, Knut Wiggen, the first director of the EMS, channelled his energy into the futuristic dream of creating a world-class computer music studio for experts and scholars.

‘I think “Visual Pleasures and Narrative Cinema” is very much rooted in its own historical context. It couldn’t have written in any other time. It was written very much as a political manifesto.’

Laura Mulvey engages in film practice from all possible angles: as filmmaker, screenwriter, essayist, critic, academic, and teacher. Through her films – at first with Peter Wollen, later on her own –, her involvement with the British Film Institute, and her academic work at Birkbeck College, University of London, Mulvey has explored critical approaches to film theory and its intersection with her interests in the semiotics of the image, left-wing and feminist theory, and the possibilities of disrupting linearity and temporality.

Deeply involved in second wave feminism, in 1975 Laura Mulvey published the essay “Visual Pleasure and Narrative Cinema”, widely considered a seminal feminist film theory text. Conceived as a manifesto – as Mulvey explains in this conversation – her provocative essay applied psychoanalytic theory to the imaginary produced by the cinematic apparatus of classical Hollywood cinema from the thirties to the sixties, in which the man is the bearer of the look, and the woman is the image. In the text, Mulvey also coined the notion of the “male gaze” to refer to the power asymmetry in representation and assigned gender roles, thus emphasising the patriarchal ideological agenda of the American film industry.

In this podcast, Laura Mulvey contextualises, updates, and elucidates on the far-reaching impact of this key text, which she revised in later essays such as “Death 24 x a Second. Stillness and the moving image”. At the same time, she opens up the debate with the notions of the “queer gaze” and the “universal whiteness” of Hollywood. Mulvey also defends orality as a form of "history from below", citing the example of “compilation films” (films that use archival footage re-written with new narrative) as a space for a new feminist film practice.

Can we think through listening? Seth-Kim Cohen, Christoph Cox, Julian Henriques, Casey O’Callaghan, Peter Szendy and Salomé Voegelin discuss why thinking should not be at odds with resonating...

The convergence of mainstream and social media platforms sidelines traditional record labels and sparks new sub-genres from mashups to vaporwave, but also reinforces the perception of music as consumable entertainment. How are we being retrained to our new environment by an aesthetic that has become so pervasive as to turn itself nearly invisible? Never conclude a historical narrative in present time.
RESEARCHVARIATIONSJon Leidecker sampling
See more

"Radio Music" connects three examples from the history of the potential of the radio receiver as musical instrument.

An introduction to the work and methodology of Japanese artist Yasunao Tone. The essay is based upon several conversations with the artist and some of his collaborators.

We dig up some unreleased fragments of the interview with Fefa Vila that we were unable to include the first time around.

We dig up some unreleased fragments of the interview with Céline Gillain that we were unable to include the first time around.

We dig up some unreleased fragments of the interview with FAKA that we were unable to include the first time around.