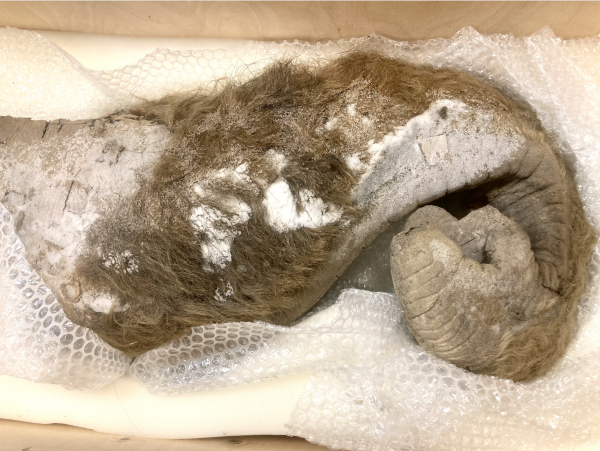 In the sixth episode, Nurturing the Ancient Undead, artist, Oreet Ashery speaks with paleontologist Tori Herridge about the past lives that emerge from the permafrost. Through these bodies, suspended in time and perfectly preserved over tens-of-thousands of years, they consider genetic legacies and the body as an archive.

Posing contentious questions around the ethics of rewilding and de-extinction projects as processes of new creation rather than of restitution, as well as the controversial drive from some in the scientific community to clone and ‘recreate’ animals from the deep past, Herridge and Ashery probe at the edges of where life starts and the human role in its creation. Through journeys of IVF, fertility and the unborn, they consider examples of hybridity, artificial insemination and cross-species pregnancies as practices that reframe how life is conceived, both metaphorically and in actuality. Weaving through their conversation are readings from Naomi Mitchison’s Memoirs of a Spacewoman (1962). This groundbreaking sci-fi novel, a core influence to Ashery’s practice, collides feminist and anticolonialism thought to question ethics of control over human and non-human bodies.

In this episode, artist Bo Choy speaks with Sayana Namsaraeva, an anthropologist from Buryatia, south-eastern Siberia, exploring the traditional traditions and stories that have emerged from the landscapes surrounding Lake Baikal, the deepest and oldest freshwater lake on the planet, and how these influence worldviews and possibilities for the future.

In this new instalment of Undead Matter, Cultural theorist, Astrida Neimanis speaks with permafrost hydrologist, Nikita Tananaev, discussing the cultural, philosophical and ecological implications of permafrost degradation as it disrupts ancient ecosystems suspended in the ice.