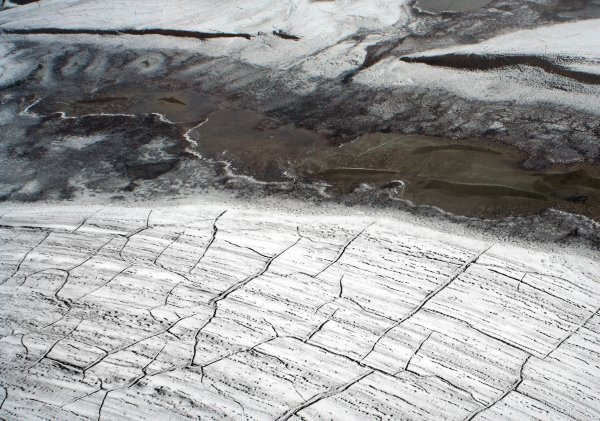 Cultural theorist, Astrida Neimanis’ theory of Hydrofeminism, positions water as an ever-shifting body that connects all beings and archives all histories. Unlike other bodies of water however, the permafrost wishes to remain still. In this fourth episode of Undead Matter podcasts, Neimanis speaks with permafrost hydrologist, Nikita Tananaev to discuss the cultural, philosophical and ecological implications of permafrost degradation as it disrupts ancient ecosystems suspended in the ice.

Covering almost a quarter of the northern hemisphere’s landmass, the vast expanse of frozen permafrost landscape is an urgent frontier of climate change. Rapidly melting in the warming global climate, hundreds of thousands of years of organic matter is thawing, releasing terrifying amounts of methane, carbon and unknown viruses into the planet’s biome.

Traveling across the thermokarst lakes and sparse tundra of northeast Siberia, they explore the complex entanglements of the ecologies, communities, mythologies and temporalities held amongst this fast-shifting landscape. Neimanis and Tananaev consider the blurred realities that exist within the watery movement of thaw and the dissolving of worlds of the Anthropocene.

This podcast was recorded in early 2022; since Russia’s invasion of Ukraine, the threat to these precarious landscapes is now more acute than ever.

This series of podcasts traverse the slippery space between the organic and the inorganic. The conversations travel from remote Arctic tundra, where ancient creatures emerge from the melting permafrost; to deep within the geological substrata of the ocean bed among the sludge of millennia-old microorganisms; outward to the celestial expanse of interstellar dust, full of life-giving potential; and back again.

Undead Matter, a new series by Sophie J Williamson, is an unfolding conversation about where life lies in the ever-turning matter of our universe, as it rhythmically resurfaces over millennia. In this third episode, writer, Daisy Hildyard speaks with marine microbiologist, Karen Lloyd about 100-million-year-old microbes, that breathe and excrete minerals: bridging the organic and the non-organic, the living and the non-living.

Lithium mines, Trotskyist sects, black boxes, planetary exodus, augmented architecture, a city as big as the entire planet Earth, the mythology of Area 51. McKenzie Wark, Liam Young and Mette Edvardsen explore these and other ideas in an attempt to think about space as more than just a medium. Space as object.