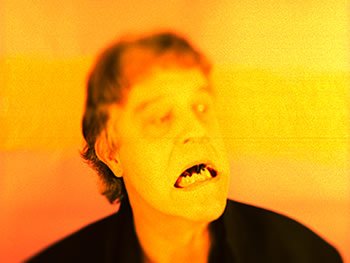 Jordi Valls happened to be in the right place (London) at the right time (the tail end of the seventies) to witness one of those subtle transitions that can only be identified by an observer with a finely honed historical perspective. Punk had appeared out of nowhere, having brewed in the catacombs of the underground at arms length from the conventions of the record industry. But almost immediately it mutated, again spontaneously and without a strategy, to become something else altogether.

This movement, which continues to embody the spirit of self-management and independence to this day, exploded into a million pieces, leaving behind a perfectly defined, almost textbook, stereotype of what punk should be. At the same time, it gave way to numerous different sub-scenes that took its oppositional, dark and destructive seed one step further. One of these metamorphoses led to something that its exponents called "industrial music", which history has often portrayed as rather Manichean, but, particularly in its early days, proved to be an enormously important breeding ground for Western contemporary subcultures.

As a privileged front-row spectator of this new anti-genre that began with mechanical repetition, noise and the use of electronica, under the banner of “Industrial Music for Industrial People”, a young Jordi Valls (living in exile in the British capital for decades before returning to Barcelona in 2008), could have joined the growing list of names who emulated the work of line-ups like Throbbing Gristle, NON and Cabaret Voltaire. But Valls preferred to distance himself from the main scene with a project that is still difficult to pigeonhole today due to its unremittingly personal nature.

Vagina Dentata Organ was born at the same time as may groups from the first crop of English industrial bands, but the form and the concept of its sound and visual works make it impossible to limit its legacy to a simple label tying it to a particular time and culture. Vagina Dentata Organ is the surrealism of Breton, Dali and Éluard, Bacon's unwholesome darkness and the grotesque triptychs of Bosch, passed through the filter of post-punk.

A collection of gruesome portraits of human emotions, primal instincts and cultural violence constructed with audible objets trouvés – field recordings in which the artist's only obvious intervention is the selection of the material. The pieces are enormously diverse: Holy Week drums, howling wolves, recordings of the final hours of Jim Jones’ sect in Guyana in 1978, the sound of a Harley Davidson motorbike on the roads of Catalonia’s Empordà... But they all share an attraction for the dark side of human nature, for the brutality that underlies social relationships and religious conventions and the dark and bloody element that hides in all of them, brought together by the small obsessions of Valls, the silent common denominator.

In spite of the radically aseptic attitude of its creator (who chose to let friends and acquaintances talk about him for this interview), Vagina Dentata Organ has had cult status for many years, and its work is sought after by collectors around the world. His singular "ready-mades", edited in the form of picture discs, are already icons of the recent history of sound art and experimental music. A name and a professional career that are synonymous with provocative symbolism, the destruction of taboos through impenetrable narrative and an anthropological fascination that suddenly becomes perversion, all blurring the line between document and visceral portrait.

A musical selection of Vagina Dentata Organ's works from 1984 until 2007.

A musical selection of Esplendor Geométrico works from 1981 to 2007.

Jota Izquierdo talks about Capitalismo Amarillo, about the informal economy, underground entrepreneurship, exoticization, and pirate ingenuity and reproducibility, all to the rhythm of cumbia.