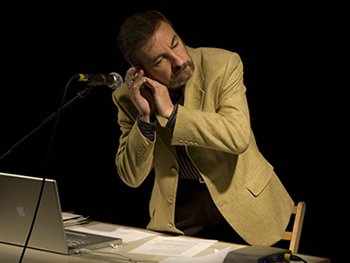 The first instalment of the monographic dedicated to José Iges is an interview that looks back over his whole career, with the testimony of Concha Jerez and Miguel Álvarez-Fernández.

If the context of sound art at the end of the dictatorship could be said to be, as Luis de Pablo claimed, "anomalous", then the context of radio art (artistic production created for the radio as concert hall), was virtually non-existent here. But if one thing could be said to define this anomalous period in Spanish music, it would be the sporadic appearance of islands - individual artists who weren't part of a coherent local scene, but nevertheless put forward a different discourse that was often more in tune with the tradition in other parts of the world.

Madrid intermedia artist José Iges was one of the few composers to defend radio art as a form of expression in Spain, but his solo work and his collaboration with other artists such as Concha Jerez and Esperanza Abad, among others, also adopted the message of the medium as its own message in countless compositions, interactive installations, performances and sound poetry works. And Iges is not just notable for his work as an artist: his name is also inseparably linked to Ars Sonora, the RNE Radio Clásica program he founded in 1985 with Francisco Felipe, and directed from 1987 to 2008.

By commissioning and promoting new works, the invaluable task of diffusion carried out by Ars Sonora managed to connect the national scene to the global radio art world, in process that ran parallel to the career of the man who was its principal driving force. Accompanied by Iges, his close collaborator since 1989, Concha Jerez, and his successor at Ars Sonora, Miguel Álvarez Fernández, we explore the world of radio art through the perspective of its major Spanish exponent.