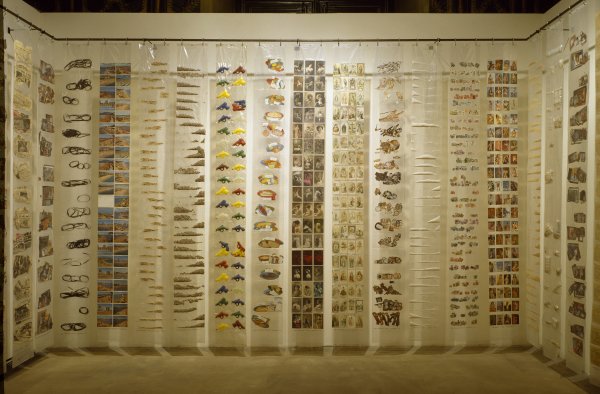 In FONS AUDIO #54 we join Eugènia Balcells in looking back over a life dedicated to art, pausing to examine some of her works in the MACBA collection. Balcells is the daughter and granddaughter of architects and inventors, a circumstance which influenced her relationship with space and research from an early age. The garden of her great-grandmother of Burmese descent also invited her to connect with nature and its mysteries as a refuge and lived experience.

After graduating in technical architecture in Barcelona in 1968, Balcells moved to New York, where she completed a master’s degree in Art at the University of Iowa. Since then, her life and work alternate between Barcelona and New York. In the mid-seventies, Balcells began creating her first installations and video works, adopting a sociological approach based on a critical and sometimes humorous analysis of gender roles, consumer habits, and the psycho-affective relationships with which we inhabit the world. Works from this period include the installation Supermercart (1976), a painstaking catalogue of everyday consumer items ordered alphabetically and displayed in large see-through plastic strips. When the installation was presented at Sala Vinçon in Barcelona, the objects could be purchased, reminding visitors that in our society, everything is for sale.

In the films Presenta and The End (1977)—which were part of the RE-PRISE series—Balcells worked with a compilation of opening and closing credits from mainstream films to reflect on the stereotypes and alienation that these visual and sound patterns impose on our behaviour. In Boy Meets Girl (1978), she divided the screen in two, echoing the Las Vegas slot machines that randomly generate different combinations of pairs of symbols. In this case, the male-female pairs were based on images taken from magazines, newspapers, and advertisements.

In these projects—and in For / Against (1983)—Balcells worked with long-term processes of compiling and amassing images and objects, using them to critically interpret systems of representation.

At the same time, she started to study the potential of the circle as a basic unit for representing and understanding the world and its dynamics. She experimented with this idea in the filming of Fuga (1979), and took it as far as it would go in From the Center (1982), a pioneering project that broke new ground in the field of multimedia installations.

Balcells has also turned her attention to light and to the limits of visual perception and its sensory connotations. Examples include the exhibition project Veure la llum (1996)—presented with Eulàlia Bosch at MACBA—, which experiments with light as a generator of spaces, the work Homenatge als elements (2009), and the exhibition Freqüències (2009), also in collaboration with Eulàlia Bosch, which explores the frequencies of light emanating from each element of the periodic table. For Balcells, light is the voice of matter.

Sound research also has also played an important role in her career. In 1981 and 1982, after connecting with several American musicians such as Peter Van Riper and Barbara Held, and continuing the exploration she had embarked on in the film 133 (1978-1979) and the experiments with endless xerox prints that inspired Ophelia (1979), Balcells made a series of sound works or visual scores: Sound Works (1981-1983), Xerox Music (1981), Clear Music (1981) and A Flight (1981).

Eugènia Balcells was awarded the Generalitat de Catalunya’s National Prize for the Visual Arts in 2010 and the 2009 Gold Medal of Merit in the Fine Arts by the Spanish Ministry of Culture and Sport.

Francesc Torres (Barcelona, 1948) is an artist, essayist, poet, collector, and curator, who has been involved with conceptual art since the late sixties. He has been a pioneering figure in the use of installation as an artistic and narrative device with which to explore the possibilities of the exhibition space, the artistic object, and the interactions that take place between the audience and the art work. Historical memory, understood as a political category, is an another element that runs through his work. In FONS AUDIO #37 Francesc Torres talks about some of his works in the MACBA Collection as he looks back over his years in Paris working with Piotr Kowalski and his early performances in the United States. He also reflects on the aesthetic-political characteristics of installations, on historical memory, collecting, and the role of museums.

The work of Antoni Muntadas is an exhaustive study of communication processes and their numerous implications for society.

Àngels Ribé creates works in which space, nature and the body become the articulating elements of a poetics of fragility based on de-emphasising the artistic object, the use of unconventional materials, and a defense of the ephemeral.