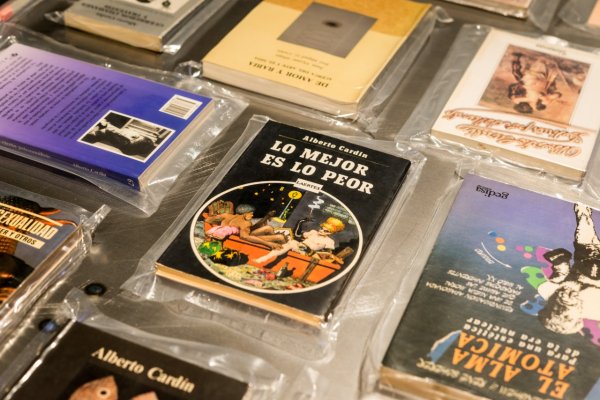 El Palomar is the artist duo Mariokissme (b. Campillos, Málaga, 1980) and R. Marcos Mota (b. Tarragona, 1988). Since the start of the project in 2013, they have developed a radical, situated artistic practice combining research, education, aesthetics, and memory to raise political urgencies that affect the queer/transmaricabollo community.

In FONS AUDIO #53 El Palomar tell us about their work in the MACBA collection Not Only Homophiles Are Homosexual, but Also Those Blinded by the Lost Phallus, a project in which they take up an unfinished, unproduced script by essayist and anthropologist Alberto Cardín and decide to make the film by their own means. In the course of rereading (and rewriting) Cardín’s cinematic vision, and through a process of immersion and meticulous research into its immediate context and background, El Palomar reconstruct a chapter in our history of sexual dissent, which is today still full of gaps and absences. Chief among them, Alberto Cardín.

Approaching anthropology from an LGTBI perspective, the prolific Asturian writer Cardín anticipated what would, years later, become queer culture. Before dying of AIDS, he bequeathed his personal archive to the Asturian Philosophy Society at the University of Oviedo. Decades later, thanks to Mariokissme’s personal research, the script came into the hands of El Palomar, sparking the desire to bring the film to life. Thus, the project creates a temporal connection with the Barcelona of 1976, reimagined and performed from the present. As it reconstructs the clues that can be found in Cardín’s bequest, it also defends his role and questions his silencing.

The script touches on the themes that Cardín later worked on in his theoretical corpus. At the same time, it is a historical document of a very significant moment in the Spanish transition, in the leadup to the political reform bill that led to the first democratic presidential election after Franco’s dictatorship. It reflects that moment well, and anticipates what has come to be described as “transition cinema”. It also anticipates queer theory’s revision of the gender perspective.

El Palomar brought Alberto Cardín’s script to the screen in an installation that presents the film along with the documentation that went hand in hand with its production, and a series of posters by various artists that were used to introduce the different scenes. Cabello/Carceller, Francesc Ruiz, Dora García and Nazario are among the artists who created posters based on notions that are explored in the film—such as perversion and truth—and also on other issues that interested Cardín, such as Lacanian psychoanalysis, the filmmaker Pier Paolo Pasolini, and Daniel Paul Schreber, the German judge whose early 20th century memoir recounts his discomfort with his heterosexual cisgender identity, a sensibility that was stigmatised by health institutions of the time and later upheld by classical psychoanalysis.

In this podcast we talk to the queer collective El Palomar about art, dissidence, and pedagogy. We dive deep into their strategies for self-care and resilience. We talk about the importance of producing disobedient, abject, situated genealogies, despite the obstacles to remembering the past in Spain. We share the experience and trauma of embodied research, and reread the pandemic experience through the lens of the lessons of the silenced AIDS crisis. Touch and queer parties emerge as political possibility and bastions of resistance where drives are liberated, limits are transgressed, and the hostilities of a hetero-centric world disappear, albeit temporarily.

In FONS AUDIO #52 Cabello/Carceller talk about their two works in the MACBA Collection: 'I Don't Care about Your Gaze Anymore' (February 1994) and 'A/O (The Céspedes Case)' (July 2009-July 2010). Through them, they reflect on blurred identities, on the diverse possibilities of genders and on the need to create new representations that disrupt the traditional patterns structuring our gaze.

Fefa Vila Nuñez is a queer feminist ‘artivist’, sociologist, mother, essayist, teacher, and many other things. Fefa was one of the founders of the lesbian collective LSD (1993-1998), which was, together with La Radical Gai, one of the touchstones of queer artivism in Spain in the 1990s. Through their political-artistic actions, LSD and La Radi defended new ways of understanding the body, sex, life, death, desire, friendship, family and work relationships, and political action. In this podcast, Fefa Vila reflects aloud on queerness as a state of radical estrangement, which is constantly being redefined. She also talks about the need to experience other forms of sociability, about other affective-relational models and about motherhood.