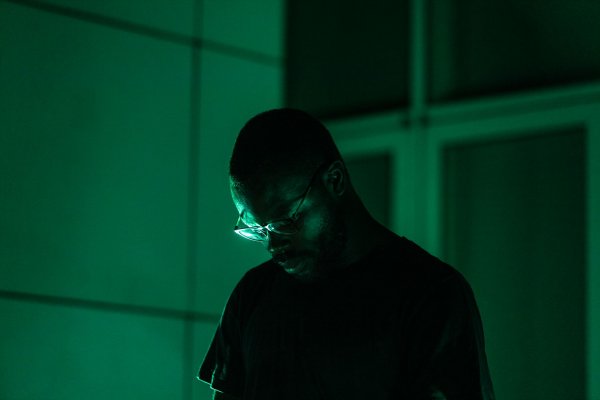 Aho Ssan is a French musician of Ivorian and Ghanaian descent who has been involved in graphic design and film works under his given name, Desiré Niamké. These practices, like his multiple identity, resonate in his music.

In February 2020, Aho Ssan released his debut album Simulacrum, just before the state of alarm in Europe, the lockdown, and the protests of the Black Lives Matter movement in the wake of George Floyd’s death in the USA: a fitting backdrop for a close listening of Simulacrum. The album’s title was inspired by Aho Ssan’s reading as a teenager of Jean Baudrillard’s Simulacra and Simulation, in which the ideas of truth and equality are challenged by the political sense of rootlessness arising from racism in France. In this light, the processes of the digital synthesis of an African jazz band on this album become possible. Realities open to slight changes, multi-layer mixes, musical variations, and necessary silence, which demand attentive, repeated listening.

In this podcast we talk to Aho Ssan about his grandfather’s lost trumpet and about an Ivory Coast jazz band that’s impossible to track down. Along the way, we share the cinematic tension of his debut LP Simulacrum and the various routes that led him there. Techno’s cultural appropriation, Black Bandcamp, and the glaring lack of representation of black artists in global electronica are part of the road he has travelled and the lessons learnt along the way.

Sara Skolnick (aka DJ Riobamba) talks about organising parties for almost ten years, about multiple identities, the traumas of migration, processes of assimilation, music, catharsis and activism, the queer space that opens up in the underground scene, her social intervention projects, the origins of dembow and reggaeton, Justin Bieber, y… toda esa vaina.

Olin Caprison talks about limits, archetypes, connections, scenes, violence, rhythm, and freedom. Or what that catch-all word means beyond the clichés and neoliberal fantasies.