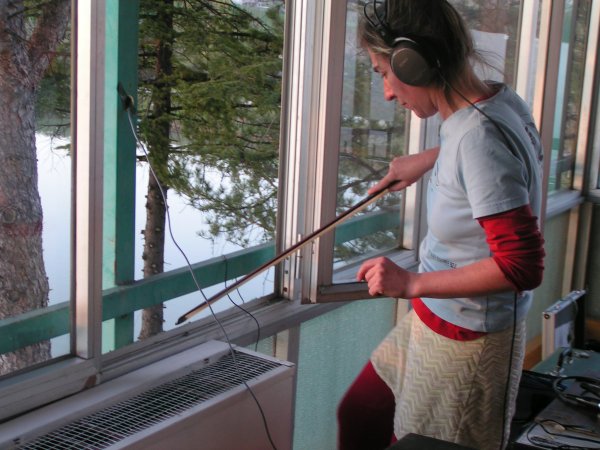 In the 1990s, twenty minutes was all it took for local authorities in the Austrian city of Graz to detect and neutralise any illegal radio transmitter. Back then, Reni Hofmüller was part of a group of activists who took over the airwaves with pirate broadcasts every Sunday from the mountains surrounding the city.

After short 18-minute sessions, the Radio Dauerwelle team would pack up its equipment and clear out, moments before the authorities arrived. It was a way of bringing new sounds to listeners while at the same time reclaiming the radio waves trapped in a state monopoly. Since then, Reni Hofmüller’s artistic practice has continued to move between the mundane and the structural. Her work focuses on technology and new media, and their influence on our everyday lives. But she also questions infrastructures and sophisticated systems – from water treatment to the internet – that affect entire communities.

As an artist, activist, and director of the esc media art lab, also based in Graz, Reni akes a an exploded DIY approach to her practice: she’s just as happy to take gadgets apart as to dismantle complex and/or invisible infrastructures in order to better understand their inner workings and imagine new uses. Her practice and activism, often embodied collectively, have led her to experiment with assembling antennas and nanosatellites, to explore phytoextraction, and to find out what buildings sound like. “No one killed my curiosity when I was little,” she cheerfully admits.

In this podcast, Reni Hofmüller shares her obsession with dismantling the invisible in order to understand and question it. A trip through time that takes us from the 1980s to the present, through her personal involvement in feminist discussions from the perspective of new media. Our conversation is riddled with references to her commitment to open source, to doing things together, to the uninhibited mixing of disciplines, and to her passion for radio and bicycles.

We dig up some unreleased fragments of our conversation with Reni Hofmüller that we were unable to include the first time around.

Process, liminality, mediation, transmission, radio, resonance, orality, archive, and abundance. In our coinciding and crossing of paths with Ukrainian artist, mediator, educator, and musician Anton Kats, “the stars aligned” to put prior learning and formats to the test. Three remote encounters, six hours of recording, and several red-hot scissors have produced this exquisite corpse in which we explore a discourse and practice that tend to spill over and exceed boundaries in both nuance and detail. In this podcast, we talk about the Europe of integration, about memory, dementia, and different ways of not knowing, about artistic research and art that defies representation, about site-specific projects and mobile, ephemeral devices, about narrowcasts and radio as a means of creating common public spaces.

Pirate radio became one of the protagonists and main motifs of the narrative thread of Lizzie Borden's 'Born in Flames'. In this short excerpt, the cult and self-taught filmmaker Lizzie Borden shares the various reasons that led her to take an interest in the phenomenon of European free radio, and how it helped her to connect the various agendas of this cult film.

Hank Bull takes the idea of boredom as a springboard to fire off some interesting ideas about entertainment and archives.