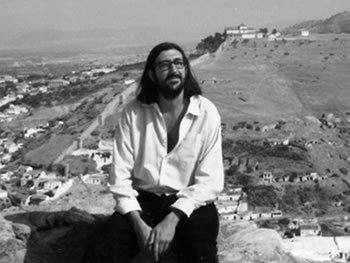 The first instalment of the monographic dedicated to Eduardo Polonio is an interview that looks back over his whole career, with the testimony of Claudio Zulián.

In a field as fragmentary as Spanish electronic music of the sixties and seventies, Eduardo Polonio (Madrid, 1941) was a virtually crucial figure, bringing personality, coherence and ingenuity to a scene that was often characterised by the use and abuse of canons imported from neighbouring countries.

Today, his name remains linked to some of the projects and institutions that helped to place Spain on the European contemporary music map a few decades back: Grupo Koan, Laboratorio Alea in Madrid, Alea Música Electrónica Libre (the country’s first live electroacoustic music group), Fundación Phonos in Barcelona, Àrea de Creació Acústica in Mallorca and the Gabinete de Música Electroacústica in Cuenca. But Polonio wasn’t just a pioneer of what was once called “new music”.

His work, rooted in the academic tradition and at the same time vigorously connected to different forms of popular music, from folk to pop to classical, occupies a strange, shadowy, unfathomable space, full of irony, multiple meanings and games, always keeping a prudent distance from electroacoustic orthodoxy.

Thirty years have gone by since Eduardo Polonio almost completely abandoned traditional instrumentation in order to devote himself to exploring the nuances and possibilities of synthesisers, computers, magnetic tape and other sources. Based on his untiring sound-humanistic research, this artist from Madrid has shaped a generous number of works of different kinds, from short electronic pieces to operas and soundtracks for theatre, often interacting with visual artists (Eugeni Bonet, Pablo Monedero, Carles Pujol and Toni Rueda, among others) in live performances in which the composer frequently plays the roles of performer and master of ceremonies, approaching the pop paradigm once more.

A musical selection of Eduardo Polonio's works from 1969 until 2007.

David Crowley looks at Oskar Hansen's links to the twentieth-century Polish electroacoustic scene, and the role of the experimental radio studio in Warsaw at the time.