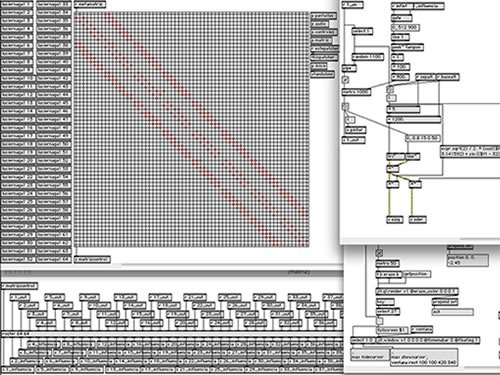 AVANT #4 reviews the artistic career of the catalan composer José Manuel Berenguer. The second part offers a musical selection of his works from 1990 until today.

A guitarist by vocation in his youth, José Manuel Berenguer was drawn to electronic media by a pure need to express a complex and disturbing musical discourse that would allow him to pose questions from the perspective of composer and listener. Having forged a career between Barcelona and Bourges in France, he is now one of Spain’s leading electroacoustic musicians – a key figure in the Spanish new music scene who continues to be interested in blurring the divisions between installations, acoustic experience and robotics. The first instalment of the monographic dedicated to Berenguer is an interview that looks back over his whole career.

Several decades separate the classical guitar that José Manuel Berenguer almost chanced upon in the backroom of his mothers chemists' and his recent installation "Lucy", based on the bioluminescent behaviour of glow worms in Kuala Selangor. But both bear symbolic witness to a career guided by an analytical, critical spirit, which has led Berenguer - a doctor and an expert in neurophysiology, psychoacoustics and electronic circuits, but, above all, a musician – to approach different disciplines and aspects of arts practice and gradually develop a discourse based on the unexpected and the exploration of the limits of sound experience.

Fascinated by the creative possibilities of programming and just as much by natural phenomena like wind, light and waterfalls, Berenguer has been able to draw on a large range of different kinds of work, from acousmatic pieces and audiovisual performances to music for theatre, soundtracks, multimedia installations, robots and sculptures, allowing him to pose questions to audiences and to himself.

Berenguer had an ongoing relationship with the French city of Bourges, where he imparted classes and worked as a composer at the prestigious Institut International de Musique Electroacoustique for many years, but at the same time he has been a key figure in the history of music experimentation in Spain.

His political consciousness and commitment led him to initiate numerous projects that aimed to promote networks of grassroots organisations and create a regulated infrastructure for the Country's electroacoustic community. Extensive teaching experience in various fields of multi media arts, sound and perception round off a curriculum that confirms the co-director of the Orquesta del Caos as one of the most multifaceted personalities in the last twenty years of Spanish sound art.

A monographic on the work and historical context of José Manuel Berenguer, featuring an interview with Joan Saura.

In this conversation, José Manuel Berenguer reflects on the concepts of soundscapes and field recordings, and discusses his recent practice in a context in which the genre is taking on an increasingly prominent role in the field of sound creation.

This essay addresses a number of concerns relevant to understanding the listening experience within art and everyday life.

This program surveys the work and career of John Cage in order to explore and learn more about his special relationship to radio, either as an instrument or as a means of communicating his ideas and transmitting his work.