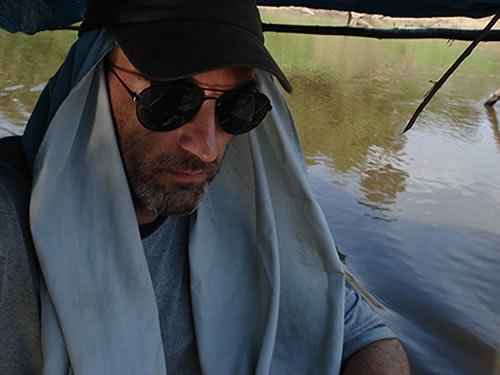 AVANT #3 reviews Francisco Lopez's entire career in music through this monographic program. The second part offers a musical selection of his works from 1981 until today.

From his home studio in the late seventies, Francisco López began working on what would eventually become one of the most solid careers in the international sound art scene. For decades, this biologist-musician has manipulated natural sound recordings and developed the basics of what he calls "absolute concrete music", a sonic approach that uses nature as the raw material for recreations of strangely beautiful parallel worlds and virtual realities.

Although it is now relatively easy to establish conceptual links between Francisco López's creative output and certain philosophical and artistic traditions of the last two hundred years, one of the most interesting (and paradoxical) aspects of his work is that it actually developed in personal, cultural and generational isolation, barely penetrated by external stimuli.

Today, it is easy to connect the work of this nomadic artist from Madrid to the theories of Goethe, Richter, Herder and other icons of German romanticism who formulated the foundations of what came to be known as absolute music: a new aesthetic and formal paradigm that banished the use of words as a vehicle and narrative thread and concentrated on pure sounds as the true representatives of human emotions. Or to the musique concrète of Pierre Schaeffer and his followers...

For years, López himself has used the term “absolute concrete music” to define the boundaries of his approach. But when López first began manipulating audio cassettes and environmental recordings in his home studio in Madrid, he was actually completely unaware of these schools. And in reality, his way of perceiving, conceiving and processing sound material arose from his own way of seeing the world, influenced by pop culture (from the many branches of alternative rock to Hollywood soundtracks), rather than associations of the academic kind.

As with many other artists his age, Francisco's work flourished (with difficulty) in a rich but dispersed underground scene, with a tape culture influenced by mail art and the punk ethic that provided people doing experimental work with a complex exchange network, laying down roots that survive to this day. What may seem paradoxical is that López was able to take this essentially post-pop, sincerely anti-academic premise and use it to build one of the most solid careers in the international sound art scene, to unanimous acclaim from critics, the art world and the experimental music community around the world. Over the decades, this musician-biologist has masterfully manipulated recordings of natural environments, developing an approach to sound that uses nature to create strangely beautiful parallel worlds and virtual realities, with their own narrative and aesthetic laws.

Francisco López transforms the environmental recordings captured by his equipment into fascinating, disconcerting imaginary worlds –alternative universes that require a profound listening, free from aesthetic prejudices and especially from the need to associate what we hear with our actual surroundings. Because while the essential ingredients of López's work – his "musical objects", in Schaefferian terms – are often sourced from nature (insects, rivers, the wind, birds, urban soundscapes), his music totally transcends the original context of these phonemes.

In the last few years, he has further expanded his immense discography (simply too huge to come to terms with), with a series of untitled works that don't state the original sound source or explain the subsequent processing, but, like a Köchel catalogue, offer a number as their only clue. Something like the antithesis of the work of British musician Chris Watson, a founding member of Cabaret Voltaire in the eighties, now a sound artist specialising in field recordings of animals and natural environments. When listening to Watson's recordings, which portray unheard/unseen daily life in wild corners of the planet, part of the experience and a great deal of the enjoyment comes from recognising and knowing the source of the sounds. With López however, it is just as essential to put a literal and figurative blindfold over one's eyes and previous knowledge when approaching his sonic cooking pot, in order to fully connect with the universal human essences that cover the fabric of his compositions.

The sober darkness of his mis en scène also prevails in the graphic quality of each of these untitled releases, which keep descriptive and decorative elements to a minimum: a clear invitation to listen first and foremost. To concentrate on what we hear and let ourselves be absorbed by these immersive, sublime, distorted, augmented and improbable but totally possible realities.

A monographic on the work and historical context of Francisco López, featuring an interview with Rafael Flores.

Most residents of El Prat de Llobregat believe that the aeroplanes are their city’s distinctive sound, but they no longer fly over their heads, they fly over the frogs instead.