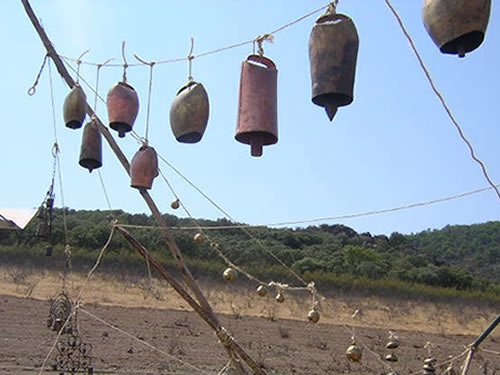 AVANT #2 reviews the artistic career of the Valencian composer Llorenç Barber. From the first childhood musical memories to his theories on plurifocal listening, the first part of the programme follows the development of his career in chronological order, with special emphasis on his city concerts and his work with bells. The second part tries to portray the unportrayable through recordings and fragments of concerts, performances and naumachias.

Llorenç Barber was one of the first Spanish musicians to attend the Internationale Ferienkurse für Neue Musik (International New Music Summer Courses) in Darmstadt (Germany), where in 1969 and in the company of Berio, Ligeti, Kagel or Stockhausen among many other geniuses, he refined raw ideas and accumulated others that would awaken years later over his long career as a composer. A succession of nuances and small linked changes that led him to practise his personal sound art under different coordinates and formats, jumping from phonetic poetry with his Flatus Vocis Trio in the mid eighties to electroacoustics (his work with the changing, open group ACTUM in the early seventies) or the reductionist iconoclastic post-ZAJ (and post-Fluxus) poetry of his Worldly Music Workshop, founded after the deep impact caused in the late seventies by the London improvisers scene. And then, of course, along came the bells.

The legend of how Pythagoras of Samos discovered by pure chance the arithmetical relations between the harmonic intervals tells that the Greek master was passing a blacksmith's forge one morning and became aware of the different notes produced by the hammers beating the anvil. Twenty-five centuries later, in a boilermaker's in Madrid, Llorenç Barber came across a piece of metal that changed his way of understanding composition for ever, the tempo, the sound spectrum and everything that hangs from his plurifocal concerts, as close to the music of the spheres as the musical theories of the Pythagorean Brotherhood. “I became a different being”, he says. “A being touched by the Holy Spirit”. For Barber the bell represented far more than a new instrument to be explored; as well as its undeniable richness of timbre it had infinite layers of history, message, latent content and, most of all, the possibility of escaping once and for all from the confinement of the stage and the academy, which had always made him uncomfortable to give shape to a new concept of listening.

And like the rest of his career, Barber's contribution to campanology and plurifocality is broad and varied. From the recitals of delicate harmonics of his handmade 'portable belfry' to the vast and countless city concerts, where church bells, bands, whistles and cannons turn the space into an impossible concert hall where listeners can walk around while the piece is being performed. Or those sound excesses known as 'concerts from sun to sun', sound marathons in a spirit akin to Terry Riley's All-Night Concerts in the sixties or Hermann Nitsch's rituals in his Prinzendorf Castle in Austria. Or the logical continuation of all of them, embodied by the naumachias: mixtures of naval battle and concert where once again there is a blend of flashes in the individual and collective subconscious, tradition, instinct and this universal Valencian's peculiar way of conceiving and exploiting the environment-sound binomial.

A musical selection of Llorenç Barber works from 1978 until today.

A compilation of a series of previously unpublished graphic scores made by Barber in Yokohama (Japan) in 2005.

This is a conversation by email with composer, improviser and sound artist Joel Peterson, which took place on February-March 2012.

David Crowley looks at Oskar Hansen's links to the twentieth-century Polish electroacoustic scene, and the role of the experimental radio studio in Warsaw at the time.